Every day's a school day

Music, birds, Scottish culture, biology; these are some of the things I'm learning about just by being in the presence of Dave. In the morning he gets up, puts on some music, makes coffee and comes back to bed. Mornings have never been my best time and he just seems to understand that. So he talks, I listen. If he tested me afterwards I wouldn't be able to answer a single question about what he's said, but I'm beginning to notice it is sinking in. I can now distinguish between the sounds made by robins, chaffinches, and sparrows, and (from walks rather than bed chat) tell a buzzard from a gull in flight. I've learnt more about Scottish culture in the last four months than I had in the previous twenty seven years of living here. As for music, well let's just say my ears have been opened. And if that wasn't enough I'm also indulging in a bit of active self instruction too.

Since the age of six the only meat Dave's eaten is rubbish sausages and haggis. And the only fish he can stand is haddock, because it doesn't taste fishy. So, because I like to cook (and feed), I have been trying to expand my vegetarian repertoire. Luckily like me he loves spicy food and is bonkersly grateful for my efforts. Some of which have been distinctly odd. But not so today.

Today I made dal flavoured with coconut milk and Indian five spice. Which I adapted from a recipe for Murkha Dal because I didn't have the fresh ginger that recipe required, and I fancied using the five spice mix my brother gave me when we were in Kent for his birthday. We thought it a roaring success so here's the recipe should you want to try it. 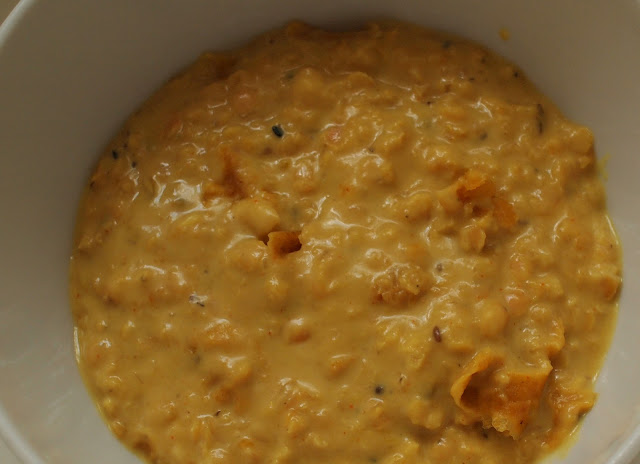 Melt the butter in a large pan (I used a big frying pan) and when it's hot add the five spice mix. Listen out for the mustard seeds popping and when they do add the onion and garlic. Let them catch and brown a bit then add the chili and cook for five minutes or so until it goes translucent. Add the ginger, turmeric and cayenne (if using). Cook for a minute and then add the lentils. Turn them about in the spicy butter and when they gleam add the water, coconut milk and salt. Bring to the boil, turn down to the kind of simmer where the odd bubble pops on the surface and cook for about 40 minutes. If it gets too thick add a little more water. All this can be done well in advance and reheated.

We just ate it with wraps which I'd heated in a dry frying pan, but you could serve it as part of a larger meal with other curried things, and/or rice or chapattis. I reckon hardboiled eggs would be a nice addition, as would, for the carnivorous, leftover roast chicken. Or even some sort of firm fleshed fish. You could also add a cup more water and have it as a soup.


Thank you all for your well wishes, and apologies for not replying to individual comments on the last post.

We've now had two weekends of flinging Dave at my dearests. On Saturday we met my two bestest friends. And the weekend before we drove to Kent (as you know from the previous post) where he had to undergo the scrutiny of a good deal of my family.

All of this seemed to go extremely well: I noticed no active disliking on either side, and he rather hit it off with the few key people he got to actually have conversations with. My sister Angela particularly impressed him with her love of theatre as did my cousin Wendy with her dedication to music. And on Saturday he talked with Rhona (a friend to whom I am so close we don't actually have to speak to communicate) for hours.

I'm feeling altogether much more settled: last week I finished my part of the research project on which I'd been assisting a couple of the lecturers at the university. That in itself was a huge relief, but it was topped when at the final meeting I was offered some work tutoring in the autumn. This means I won't need to injure myself trying to find another job over the summer, which, in turn, means I now have time to get on with the first rewrite of my novel. The novel whose first draft I finished over a year ago but haven't been in a fit state to sit down and look at since.

So today, in order to create a comfortable space in which to work, I mostly (with the help of a friend) shifted furniture. More of which next time.
Posted by Eryl at 23:11 17 comments: