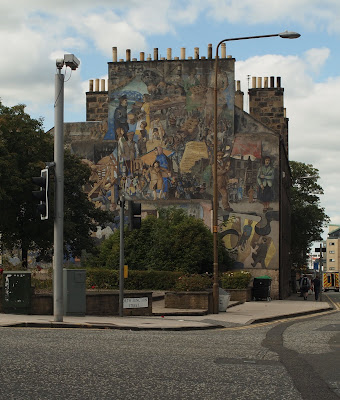 This is what I like about cities: a wall just round the corner from Bob's new flat.
Had a rather odd week. The police were involved, scary.
Yesterday we went to Edinburgh to see Bob's new place, it's better appointed than this house! And in a much more interesting place: he has a theatre, art school, cinema, and some fantastic food shops right on his doorstep. Not to mention the river with it's big old warehouses. We lunched in a Turkish café, then stocked up on Japanese mayonnaise (recommended by Parsnip herself!), mirin, Korean hot pepper paste, and sugared cuttlefish at an Asian supermarket, and went to the lovely Cameo cinema to see Tree of Life.
I will have to see that again before I make any judgement, but I found it irritatingly lacking in story. This may well be because I'm not intellectual enough to leap the gaps and make the connections necessary to get what a sharper mind would. It was very pretty, I'll say that, but a bit earnest for my taste.
So, tomorrow morning I set off to visit an aunt in the south for a week, followed by a stay at my sister's, also in the south (of England, I should say). So I won't be around again until mid August. When I get back I plan to do my laundry and dash up to stay in Edinburgh with Bob before the weather turns cold(er), but I'll pop in and say hello while my smalls are being spun.
Bedtime now. See you in a couple of weeks, X
Posted by Eryl at 22:55 20 comments:

The Art of Change

In a recent post, writer Sarah Duncan wrote about change in fiction: people want to read about it, she argued. Why? Because they "want to know how a character reacts to that moment of change." We have to deal with it in life, and having read about how others do so helps us recalibrate when that happens. We are constantly having to rewrite the ending to our personal story so having lots of examples to draw upon helps us see how to proceed.

On Friday our son, Bob, left home with only the barest notice. I actually didn't know what to do with myself. Usually when something discombobulating happens I phone all my friends and by the time I've told the story a number of times, and been given lots of sympathy, I can at least get on. But, if I'm honest, I felt a bit pathetic this time: Bob's twenty five, he's left home before, we, I, knew he wouldn't be here forever; would anyone see his leaving home as a hitch? So I just posted something about it on my Facebook page and left it at that. This did get me lots of sympathy, and also a couple of emails. One from by best friend in New Zealand, Mark, and the other from my sister, both asking for the details. This allowed me to verbalise and thus get some purchase on the scene; just like writing a story. Here are the edited highlights of my replies, they were almost identical:
Hello,
here's the story:
On Thursday at supper Stevie said he has to go to Edinburgh next week to see a client, and asked if we wanted to go for the ride.
"Okay." I said.
"I'm going to Edinburgh tomorrow." Bob said.
"Oh are you, any particular reason?" Asked Stevie.
Bob has been going to Edinburgh a fair bit to get a kilt sorted for the wedding of one of his friends.
"Well," he began, and told us about Joe's friend, Chris. He works for a letting agency, and a really nice flat had come up for an unusually reasonable monthly rent.
"So I'm going to look at it." He said.
"With a view to taking it?"
"Well, yeah."
So off he went the next morning and when he came back he dangled a bunch of keys in front of me and smiled.
"Ooh, you took it then?" I said.
"Yup."
"When are you moving in?"
"Now." Big grin. He'd already been out and bought towels and stuff!
Once he'd had a spot of lunch and packed, off he went. Stevie arrived just in time to see him go, though I'm supposing Bob would have hung about for a while had he not.

I cried. Stevie wandered around like a benevolent poltergeist. We went out for supper. 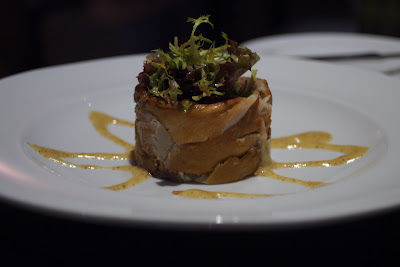 On Saturday I went to clean the attic rooms Bob has been occupying, and found an infestation of moths had eaten my antique kilims. We went to Glasgow to stock up on a few necessaries. 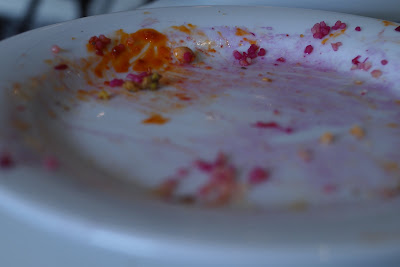 Obviously we stopped for lunch, can you tell what we had?

Yesterday I walked into my workroom and could stand the colour of the mahogany table by the window no longer: a dark reddish brown, like a cancerous stool, it sucks the light out of the place. So I painted it. Farrow and Ball Parma Grey, it's the colour of Kentish skies now. 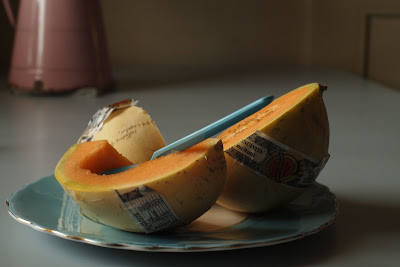 I realise this is mostly a picture of a melon, but you can get an idea of the paint job.

Bob's like me, we both take a long time to turn things over in our minds, assess all options, process, incubate, whatever you want to call it, but once the period of gestation comes to an end we have to act. We can sit still no longer. He'd been back here for just over a year. I knew he'd be leaving, at some point in the near future, I'd sensed a pattern change. I just wasn't quite ready for the action.

But, thanks to the variety of fictitious scenarios I've read, and seen in plays and films, I had lots of vicarious experience of dealing with change, so haven't chewed off my own limbs in despair. In fact, now the shock has dissipated I'm happier than ever: my son is off on a new adventure (and only an hour's drive away), and I have a table that doesn't piss me off every time I walk in the room. Sarah Duncan, I agree.
Posted by Eryl at 18:11 26 comments:

More tests, and some bread

There's something compelling about sun-dried tomatoes. Maybe it's the fact they have the word 'sun' in their name, but they always make me think of lush Italian gardens and loggias with tables large enough to seat a huge, ebullient family as they help themselves to the colourful, fragrant and carefully prepared contents of beautiful pottery bowls; eating, talking and laughing all at once. So, finding some in the local deli I couldn't help buying a pack. 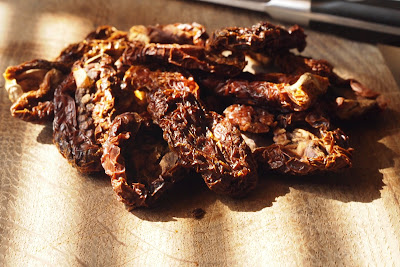 They sat around for a while, peeking redly from their cellophane like a bag of scabs. Then one day I thought to make bread to go with supper and spotting the tomatoes on a shelf decided to add them. I've had bread with sun-dried tomatoes in posh bistros and always enjoyed it. 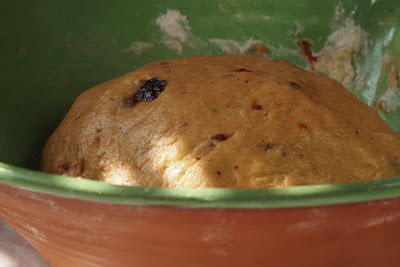 I didn't have a recipe so I augmented Nigella Lawson's plain white loaf. First I chopped the tomatoes into little slivers, and added them to the water to reconstitute for ten minutes. Then, once the water had been added to the flour/yeast/salt (I use instant bread-maker yeast, it's great you just chuck it in!) I drizzled in three tablespoons of extra virgin olive oil. And then proceeded as usual 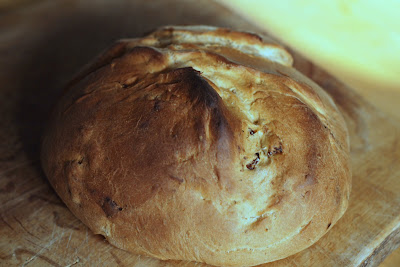 And here it is, a little dark on top, but none the worse for that, and wonderfully crisp of crust. 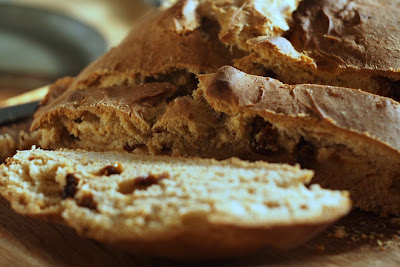 Inside it was soft and fluffy with a very slight cakey texture. The flavour of the tomatoes really did permeate the whole loaf, which, we thought, was a good thing.

I served it with cold meats, cheese, and salad.

I'm still not getting this picture thing right, but it's better. Alesa very kindly told me how to isolate each photograph with a bit of HTML code. That seems to have worked, but getting the text under, rather than to the right of, the shots is a real palaver, and so the whole thing seems no speedier than the way I was doing it before.

Some things I've been eating lately, and a self portrait – another test of the new photo uploading process 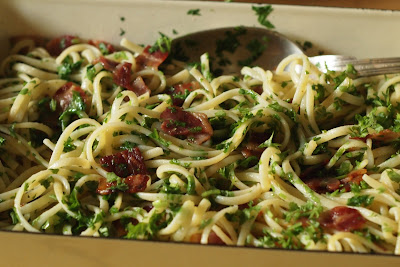 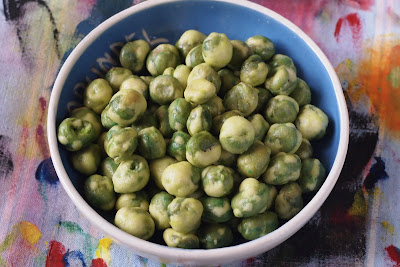 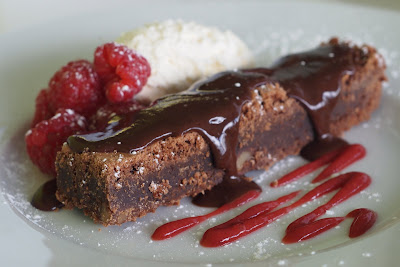 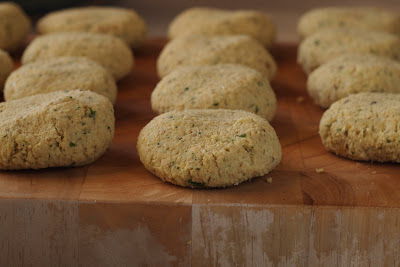 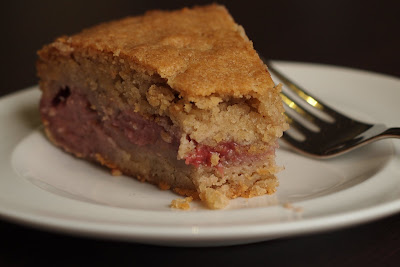 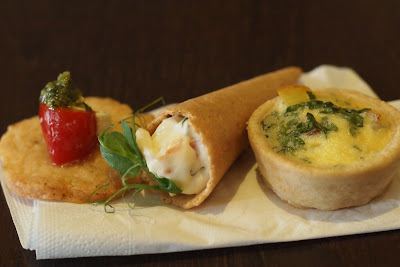 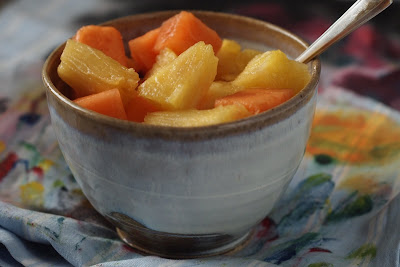 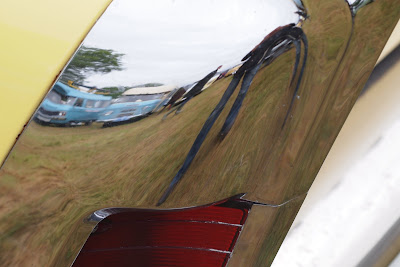 Linguine with bacon, garlic oil and parsley. Recipe courtesy of Nigella Lawson.
Wasabi peas.
Chocolate brownie at Harvey Nichols, Edinburgh (it looks prettier than it tasted: not chocolatey enough and fork bendingly hard).
Falafel, yet to be cooked.
Strawberry shortbread cake, Brodies: a fab new eatie place in my own town, and my new favourite place. I've been a few times now and haven't eaten anything that wasn't wonderful. Eggs Benedict and a Bloody Mary at Brodies is what I now call Sunday.
More Brodies: canapés at a recent Moffat Book Events get together.
Melon and pineapple one recent lunch: an attempt to offset the extra calories Brodies is bringing to my flanks.
Every year in Moffat there is an old car thing: hundreds of people come along to show off their ancient motors. So this year I went along for a look, it really is fascinating, cars that came off the production line well before I was born gleam like tart's lips. Here is the tail fin of a Buik.
Trying to do this straight from Picasa, which is a much faster, smoother way of uploading the photos, but I can't seem to make the text work. It's fine in the editing box but all over the place in preview. So all I can do is hit publish and see how it looks on the blog. If anyone has any tips, or knows of a better way to upload photos to the blog, do share. 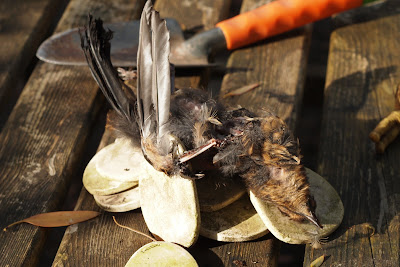 Trying out a new (to me) way of posting photos to the blog, do bear with me...
So, I found this dead bird by the bins and brought it to my garden. I don't suppose anyone knows what sort it is...?