I'm feeling a bit of a rotter. I've had trouble commenting and it doesn't take much for me to think: "fuck it..." and go off and do something else. Also, last Friday was Stevie's birthday so that took me away from my desk for a bit: there were gifts to buy and wrap, and a cake to make for starters. Then, on Saturday, we went to Kent (370 odd miles away) for my niece's eighteenth birthday party. We drove down on the day, just arriving in time – bloody roadworks all the way from Bedford to Dartford – and drove back yesterday, so spent most of the weekend in the car. I didn't get to bed till 4am yesterday morning and was awake again at eight-thirty. Now I'm knackered. It was worth it, though, I hadn't seen my niece for two years and she is such a lovely girl. And it's fair to say that her mother (my sister) is one of my favourite people in the whole world: I always feel better for talking to her, so I'm really glad we made the effort. But I feel like I'm neglecting my friends which I hate to do, so here are a few gardening tips I picked up yesterday afternoon in Rochester: 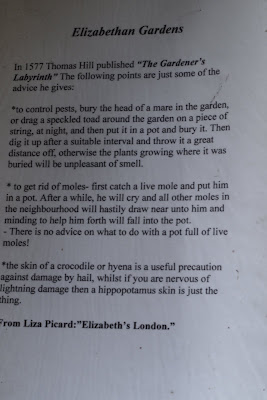 Hopefully when I try tomorrow Google will be able to detect the necessary data and allow me to publish my comments.
Posted by Eryl at 22:03 16 comments:

Of Mud and Interesting Attire

Family went to the Eden Festival yesterday (Bob was working there but he killed a few hours with his aged Pees before his shift). In the fine tradition of music festivals the weather was unpredictable: the sun almost shone but it rained most of the time, and there was a lot of mud.

I haven't been to a festival since about 1977 and was rather comforted to find the dress code hadn't changed. I felt quite out of place in my jeans and black waxed jacket.

There was fabulous food: Tibetan, Seychellian, Indian, and more.

Here are a few photos, snatched while the rain was off: 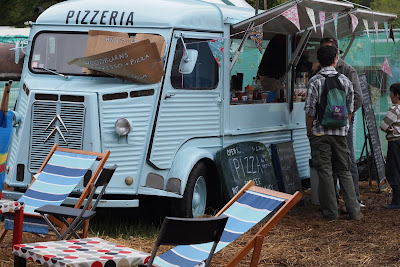 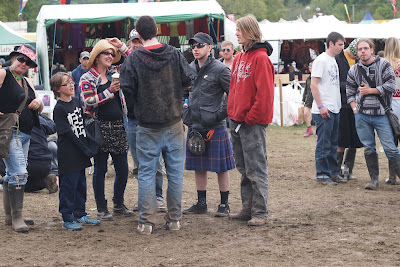 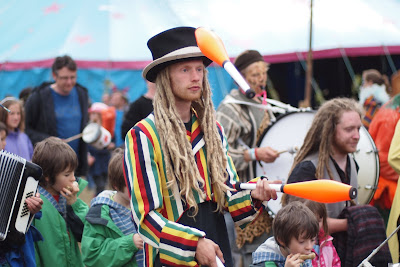 A rather Shakespearean procession. 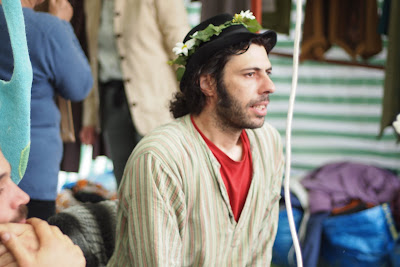 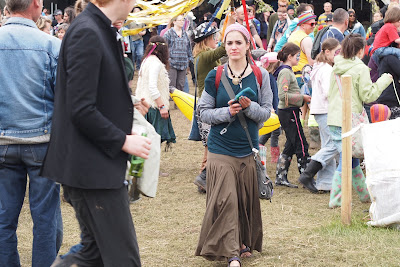 This is one of those looks I've always wanted to emulate but never been able to. 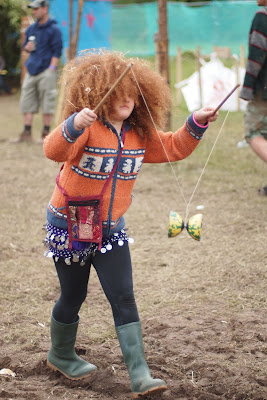 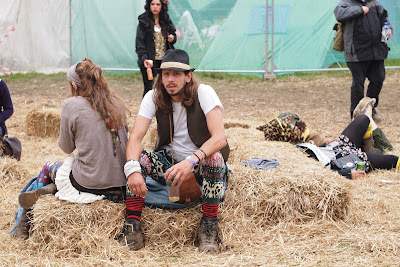 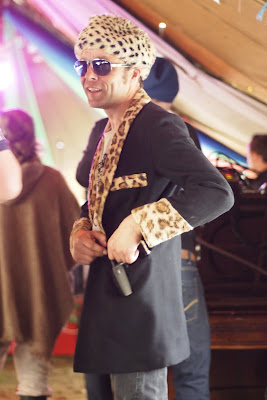 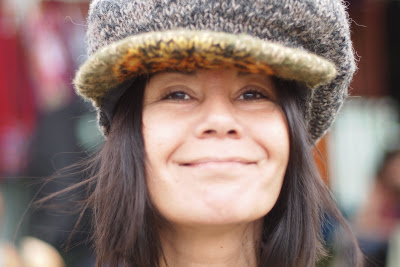 I tried on a hat I thought might make me fit in, but it was too big. 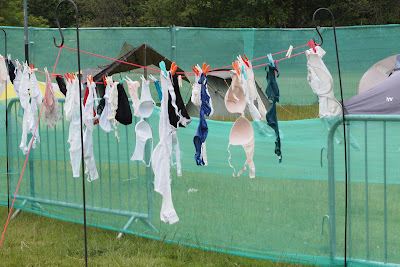 Not quite sure what this is all about. 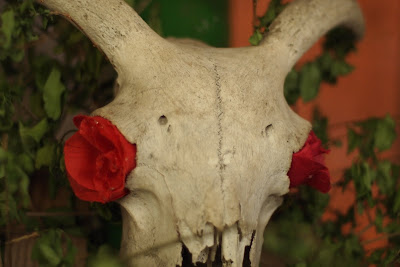 For a while there I didn't know what to do with myself. On Friday I finished the first draft of my novel and now it must be left for a while – Stephen King advises a minimum of six weeks – in order that I may read it with fresh eyes for the rewrite stage. Thus the weekend was a bit of a damp squib: so used had I become to my routine of rising, making tea, and getting straight to writing I drooped about noticing all the flaws in myself and how dusty my room was. Most other activities had been squeezed to the borders, like internal organs during pregnancy, and so when the story was out I felt hollow and didn't know what to do. And I missed Cristina, my main character; we'd spent hours a day together for eight weeks and suddenly she was gone. I felt abandoned. 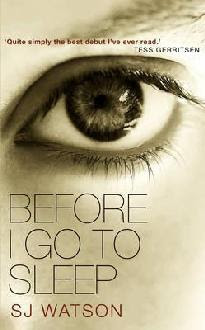 It had been all over Twitter where I kept seeing snippets of rave reviews; had already been translated into something like thirty nine languages, and sounded utterly intriguing. I enjoyed it, up to a point. Adverbs irritate me beyond reason. I can cope with a few, one can't expect a writer to show everything, some telling is necessary if only to keep things moving, but Watson relies on them a little too much for my sanity. I also felt he used stereotypes without exploring them, so there was a slight smug, elitist feel about the book. This is a shame as the premise is interesting and the story, for the most part, well told.* The film rights have been bought and filming is set to begin sometime this year and I reckon it will make a bloody good film in the right hands. I also look forward to reading Watson's next book, he will have learnt a great deal from writing this one.

Yesterday I got back to the kitchen, made a loaf of bread, and remembered what I really like to do. I'd asked Stevie, he is the shopper, to get me some wholemeal flour at some point and he did, but it was bread flour. With new found time to spend I can't think of a better thing to do than bake bread. I have never been successful with wholemeal bread though. White, yes, but brown always comes out dense and chewy. I've never known why that might be, but decided to be especially careful when kneading. I love kneading, it makes me feel authentic and strong, and that moment when you feel the dough turn silky and know it's done, it rocks. Whether it was that extra care or just the benefit of experience I don't know, but I'm glad to say this loaf was perfectly bread-like. Here are some shots: 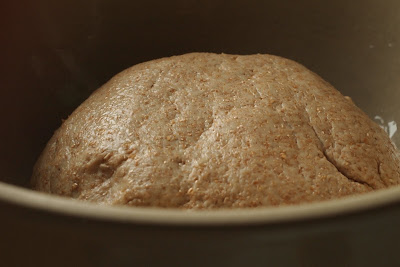 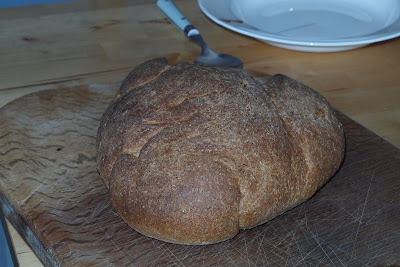 The shape was a bit peculiar, but it had a good crisp crust about which I am particularly pleased. 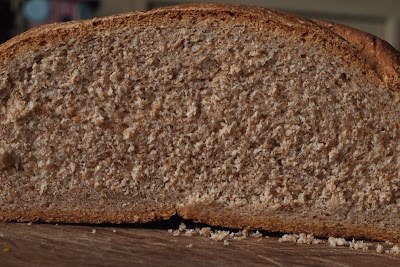 It looks just like bread inside! (Apologies for the rather soft focus).

We had it with chorizo and white bean soup, which I made because we had a few chorizo that needed to be used and soup is about the best thing to serve with fresh bread: buttered and dipped.
* The Guardian Review says it's marvellous, so don't take my word for it!
Posted by Eryl at 17:25 22 comments:

I'm up to my neck in a (fictional) house building project. It's great this writing business, you get to be all sorts of people and do all sorts of things that you wouldn't ordinarily be able to. Who says the world inside your head is less real than the one outside it?

But, I just wanted to share a tale with you. Thankfully, I can do it with nothing more than a link, there's no point in me summarising something that is so beautifully written. Some of you already know UB, or, to give him his full title The Unbearable Banishment, but not all. So, pop over to his blog and read his tremendous tale of tenacity, which spans eight years (I think I've got that right), includes Bruce Springsteen, Nick Hornby, and a lost friendship. And it was all for the love of books. What are you waiting for?
Posted by Eryl at 22:30 13 comments: