If this doesn't take your breath away...

Email ThisBlogThis!Share to TwitterShare to FacebookShare to Pinterest
Labels: arms I want, Bach as you've never heard him

Photo safari 3: This time Alesa her friend Khnoum and I were joined by Kass, who submitted a theme. If you'd like to have a guess at who took which shots (as usual we each provide one photo for each theme) be my guest. 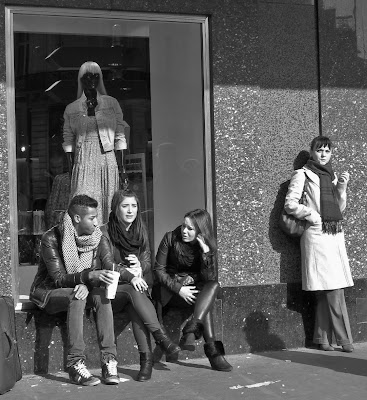 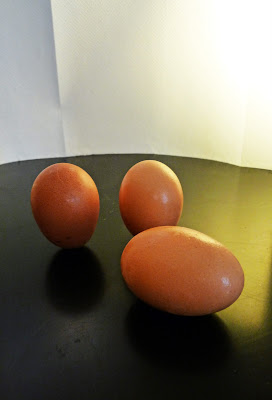 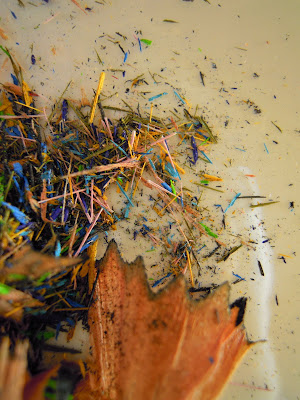 The Music in my Head 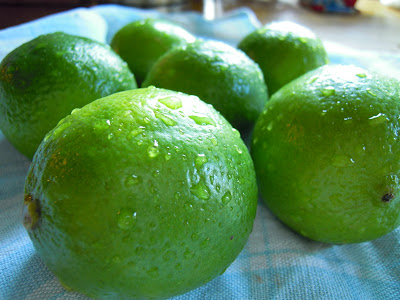 On a Cloth Greenly 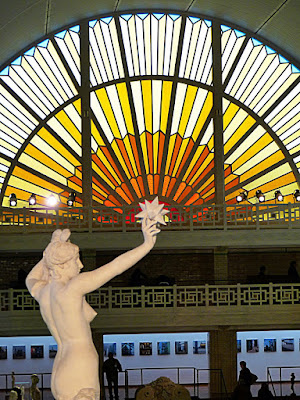 Of Angles and Curves 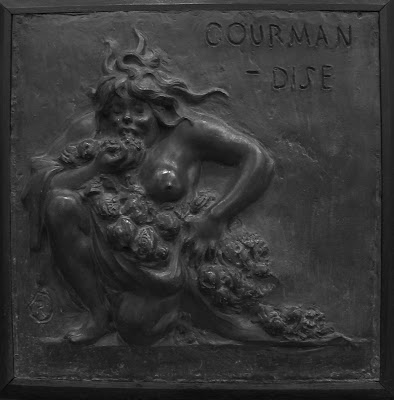 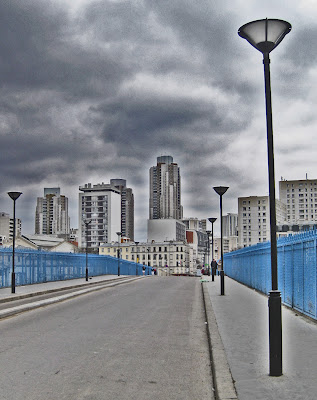 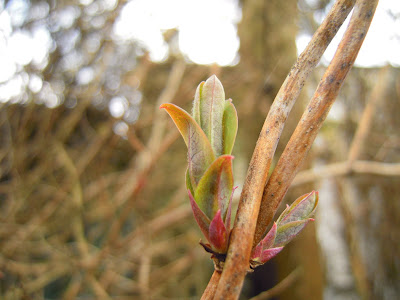 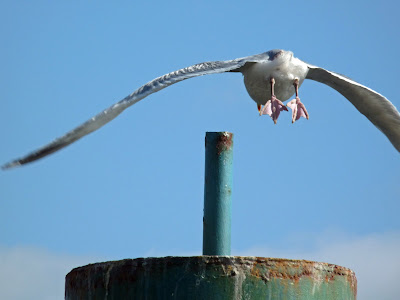 First I must Dive
ºººººººººººººººººººººººººººººº
I have so many things to tell you I'd have to do two posts a day to fill you in with all the interesting things and people that are suddenly seasoning my life. In the next day or two I hope to do a post on the apple man. (I didn't even know apples grew in Scotland!) And I must tell you about the Women of the World group to whom I now teach creative writing. And then there's my beloved local group who I've been teaching since the beginning of January. I say 'teaching' but it's more like providing them with the right space to organise their thoughts into the stories and poems they are already very capable of writing. They amaze me.
My project is coming along, but I must admit I've been utterly seduced by Pinterest recently and spend far too much time filling my virtual boards, nosing around other peoples', and following links.
Posted by Eryl at 21:20 28 comments:

Three Delights and a Worry

I was at an event for IWD on Friday, as a kind of writer in residence, at which I won the main raffle prize: 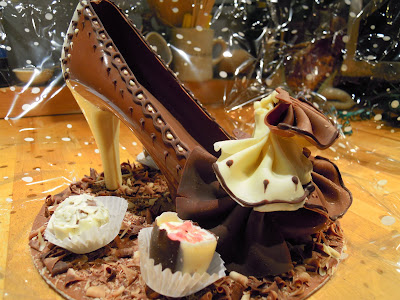 which was very delicious.

I'll be doing much the same at another event tomorrow, though I don't suppose there'll be any chocolate shoes up for grabs.

And, of course, yesterday I made pancakes (crepes) for supper. For which I: 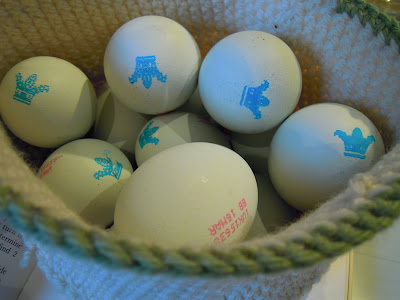 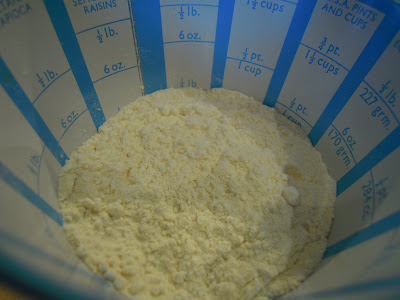 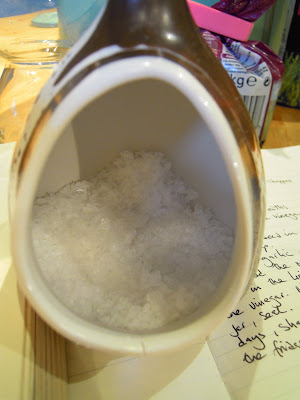 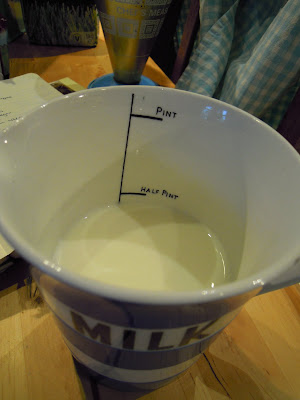 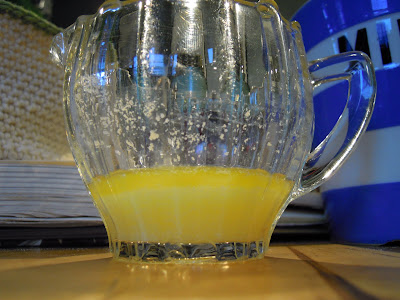 and a tablespoon of melted butter. 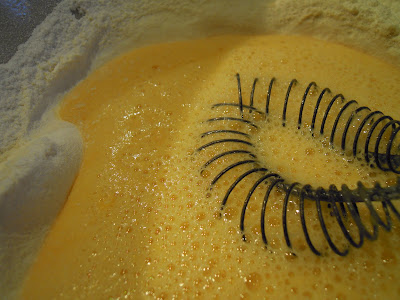 Sifted the flour into a bowl, made a well in the centre, broke in the eggs, and began to merge the flour and the eggs with a whisk. As I did this I also added the milk in a thinnish stream, and kept whisking until everything was amalgamated and the batter looked like single cream. 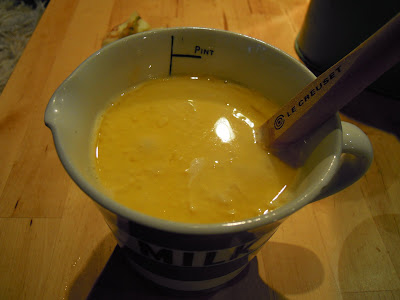 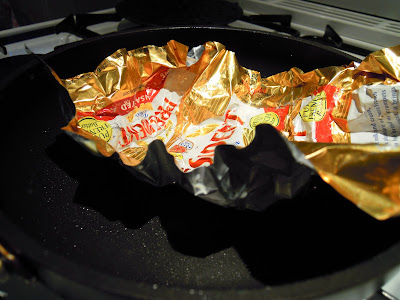 while my small frying pan came to a smoking heat. Poured some of the mixture (roughly two tablespoonfuls) into the hot, butter smeared pan and turned the heat down to medium. 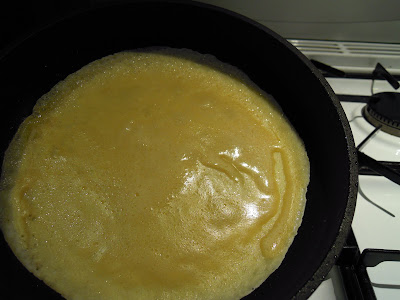 Swirled the batter around so it coated the pan, left it for a minute or two, until, having turned into a pancake, it moved freely when the pan was shaken vigorously. Flipped it over to brown the other side, 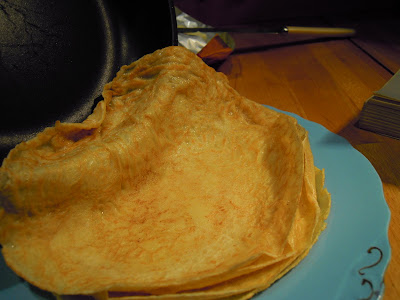 slid it onto a plate, and proceeded with the rest until 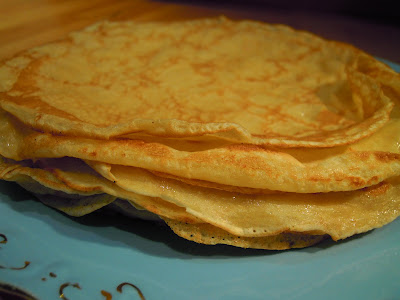 I had a stack. (It doesn't look very stack-like here but I did make twelve.)

I made them a few hours in advance to prevent the more usual stove-side flap where as I cook the others eat. It was then just a matter of reheating them (on the plate they were stacked on and covered in foil) in a low oven for about fifteen minutes, and they turned out fine, neither dried out or soggy. 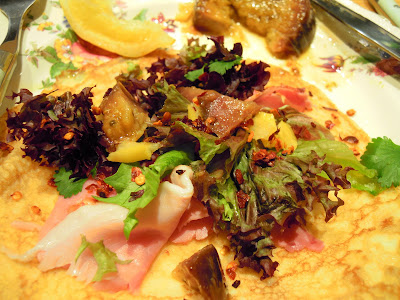 I put various filling possibilities on the table and we all just built our own supper. Here I have ham, leafage, and some of the contents from the previous post's jars. The preserved lemons are fantastic: summer holiday in a bottle. 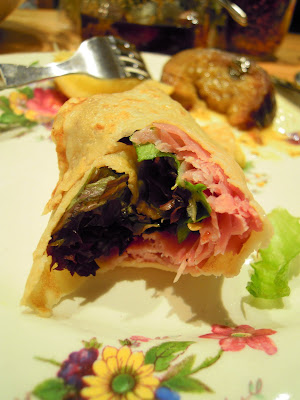 Rolled up and ready to scoff. I should say we had them for both main and pudding courses. For pudding we added Nutella and chopped banana, and (not to the same ones) lemon and sugar but I forgot to take shots of those ones.

The last thing about yesterday is that it left me with only one month to go as a forty something. I'm sure there are things I meant to do before turning old and am slightly concerned that I haven't done any of them yet. Is there anything I should really be getting on with before it's too late, fifty does seem rather on the edge of the abyss?
Posted by Eryl at 18:04 31 comments:

Because they were going cheap in Ikea I bought more kilner jars than you can shake a stick at. The contents of many an opened packet found itself rehomed in glorious glass: crunchy muesli, spelt flour, Lebanese cracked wheat et al, all neatly contained. Now I just need a proper pantry. Bob said yesterday when I was hunting for somewhere to store my baking supplies: 'I think you've exceeded your capacity.' Quite! Especially as I've been fruitfully creating new contents for the rest of the jars: 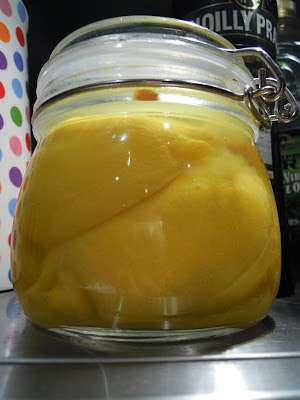 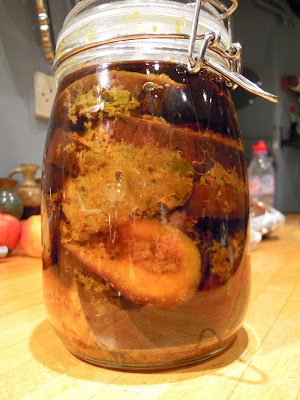 Brinjal pickle. My mother used to make this when I was a child. Although it was a favourite of mine I'd forgotten about it until I came across a recipe recently. Apparently it's a speciality of the Bene Israel community of India.* 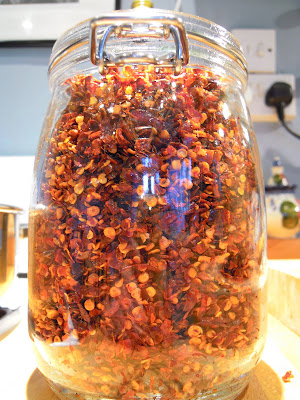 Chilli-fry: the hottest condiment ever.**
*Both recipes from Claudia Roden, The Book of Jewish Food: An Odyssey from Samarkand and Vilna to the Present Day (Penguin, 1996)

**This recipe was given to me via email by my brother, with the addendum: "When it has cooled down and you've bottled it, don't just wash out the frying pan. Pour some oil into it and heat slowly, scraping up all the remaining bits of chilli and onion that are stuck. Allow it to cool, bottle it, and you have a chilli infused oil for salad dressings, pasta, or just to dip fresh bread into." (It's these little asides that make recipes from people you know so much more rewarding than the ones in books.) I just happened to have some bread left over from the previous night's supper; needless to say not much of the oil made it to the bottle: 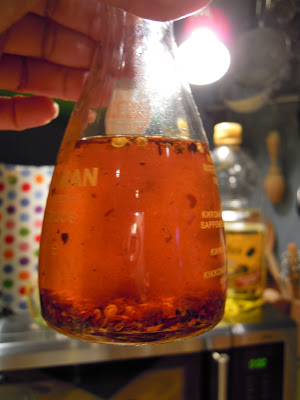