When Bob left for Hawaii I didn't expect to see him again anytime soon. So that he came home to help celebrate his father's birthday, and stayed for just over a week, fills me with gratitude, joy and pride (I'm not sure I'd have done the same at his age). Now he's on his way to Portugal with plans to travel round Europe and into Asia, we took him to the rail station on Friday. 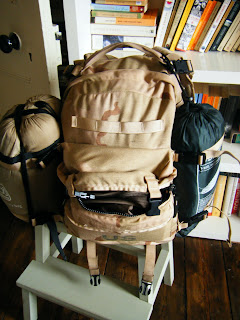 Packed and ready to go 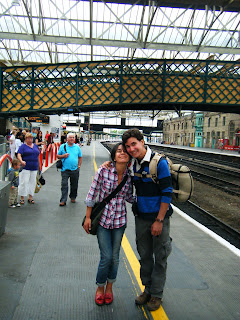 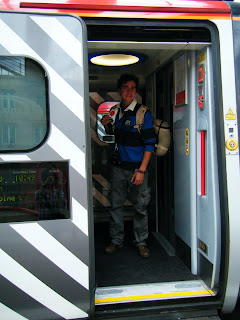 Luckily I'm not the sort who needs to have the people I love close by, I just need to know they're happy.
Posted by Eryl at 14:22 21 comments:

We had lots of visitors at the family paintball site this weekend. I spent most of Saturday and Sunday standing behind a chipboard counter saying: 'fifty-pee' or 'a pound, please,' as thirsty hungry men came in for sustenance. We were hosts to a company that puts on 'big games', this one was called Wedding Day. 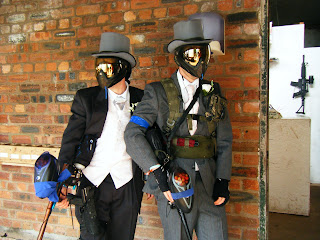 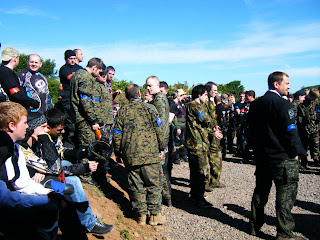 I guess these chaps had their own narrative to play to.

While everyone was in the woods blasting I was able to wander around and take some photos: 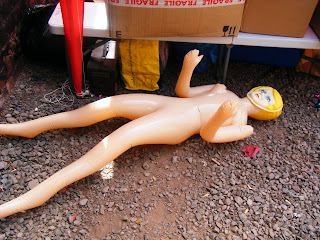 The Bride (once her bachelors have done?) 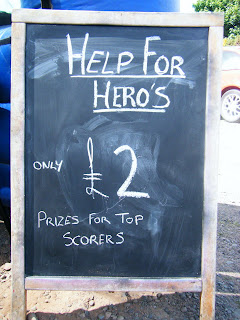 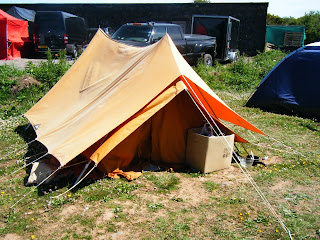 Lots of people camped but this was the über tent 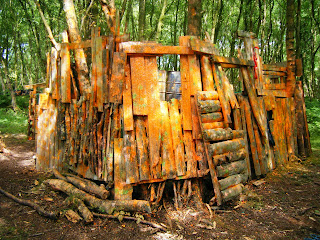 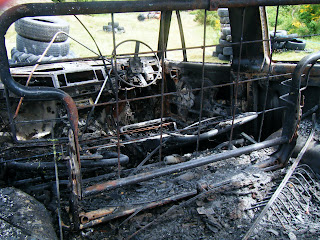 If one must go out to work it might as well be in a place that looks like this: 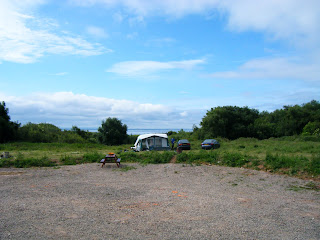 Looking out across the car park to the Solway
on Monday morning.*

Yesterday (Monday) we had normal customers: a family birthday party. So I spent the day out in the woods ensuring safety, unjamming guns, and getting very shot.

*All pictures go large with a click, extra large with another.
Posted by Eryl at 12:30 27 comments:

I knew, in theory, that the 24 year old I married would alter. I never quite understood, though, that one day I would be married to a 50 year old! Happy birthday to him anyway. 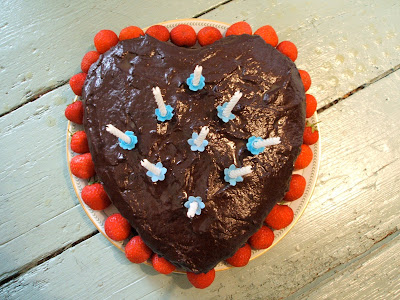 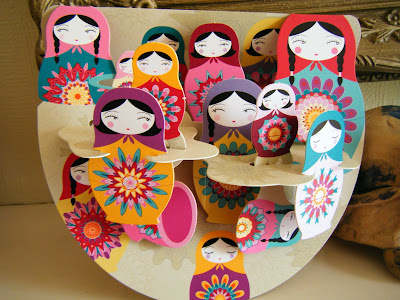 Bob has come home, on his way from Hawaii to Portugal where he is going to work on a horse ranch(!), so it feels like my birthday too.

Nothing screams holidays to me louder than potted geraniums. You see them on windowsills and, my favourite, lining steps pretty much wherever you go in the warmer parts of Europe. We won't get away this year – can't remember when we last did – so I thought I'd bring a bit of away here.

Years ago, whilst holidaying in France, I was thrilled to see geraniums potted in old cans. I have a bit of a thing about cans anyway, I once bought an enormous can of tuna because it was so attractive, it never got opened. I'll often base my choice of oils and whatnot on the appearance of a can. Anyway, I happened to empty a favourite the other day and thought: 'mmm, this would look good with a geranium in it.' So I took the top off, rolled the sharp edge over and punched some holes in the bottom. 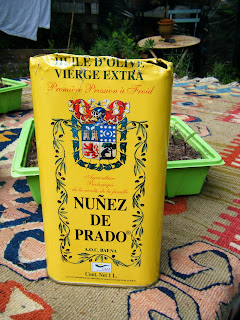 Yesterday I went to my favourite garden centre looking for the perfect specimen to fill it. I had a notion for a very dark red but no luck, they had pink, salmon (eurgh!) or orangey red. The singles were all too big for the can so I ended up buying a tray of four small ones. So after canning one I had three left over. What to do with them?

In the shed I found an old wall pot which I must have brought up from the old house, where we had garden walls, and decided I could nail it to the fence. So I put another in that. 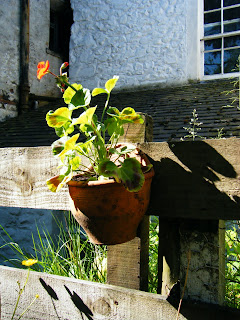 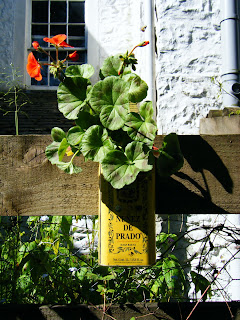 but just two hanging there somehow looked wrong so I potted a third in a coffee can (I have hundreds of these) and hung it alongside. 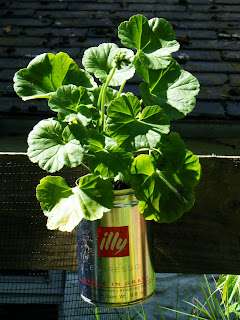 The fourth awaits a new home, I'll have to think about where to put it. But for now I have this: 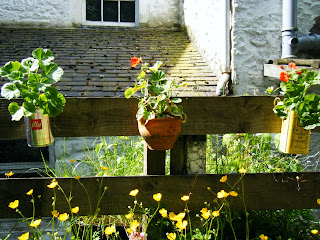 it's not France, or Greece, or Italy; but hopefully on a sunny afternoon a sudden glance will make it feel like it is.

Oh, and MJ has her blog back, thank goodness google have managed to sort themselves out. 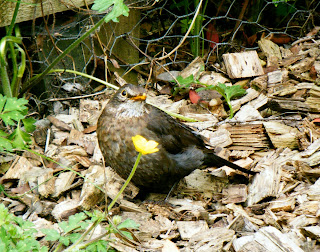 On Savanna's blog today I read that one of her favourite blogs, infomaniac, has been removed by blogger and the author Mistress MJ ousted from google. She wasn't notified that this was to happen. It may be an error, technical or otherwise. I've never actually read the blog in question, I have come across MJ in the comments of other blogs, and hers has been on my mental list of sites I must visit when I get time because her comments are always witty.

Whatever the reason the blog has been removed we all need to know why. MJ has lost four years' worth of content, bam! just like that, and she can't even ask why because her voice has been silenced in googleopolis. Which all feels far too Kafkaesque for my liking. So I posted this question on blogger's help forum this afternoon:

I heard today that a blog – 'Infomaniac' – has been removed, and four years worth of content lost, overnight. The author was not informed that this was to happen and the blog hasn't broken any blogger rules as far as can be determined. The author has also been locked out of her gmail account. Is this a technical problem, a human error, or has it been done intentionally? If it has been done intentionally I would very much like to know how blogger justifies this action? If blogger has a censorship policy that involves removing blogs without giving notice to the author all blogger users need to be made aware of this.

One of the things I love most about the online community is that we band together and can, thus, both effect and affect the way it operates. This blog, another one I've been meaning to read for some time, provides the links needed to ask a question of blogger, which was rather handy for me as I wouldn't have had a clue otherwise. You can see my question on the blogger forum here, and should you so wish you can add your voice to it, to one of the growing others that have been asked about this matter, or you can ask your own.

Update: in my comments Vextasy provided a link to the data liberation front which explains how to back-up your blog. It seems well worth the five minutes or so it takes to do this, mine is being exported to my hard drive right now.
Posted by Eryl at 19:34 19 comments:

Apologies to everyone whose blog I've not visited of late: I'm in the process of overhauling my routine which had slipped into a blear of nothingness. Now I have only myself to crack a whip I'm finding it a struggle to do anything at all. And with Stevie working from home during the week I feel bereft of boundaries, the hours slide by unproductively. I seem to be asleep most of the time. But, now I think I've finally worked out a plan.

It's not entirely passed from theory into actuality yet, but it's getting there. I have always been a night person: I woke late, did wife/mother/house stuff, and started my own work after supper, carrying on till 2 or 3 or even 4am. That's no longer working so well. So, I have been training myself to go to bed early, and actually sleep, and get up early. So far 7am is the earliest I've managed, but the plan is to get into the habit of going to bed at 10 and get up at 6; write for four hours from 6.30 to 10.30, with a giant mug of tea for company; run for two hours; shower and dress; make coffee and read until the need to make supper surfaces. After supper, do internet things like blog. This will be Monday to Friday.

On Saturdays, starting last Saturday, I marshal at the family paintball site,* and on Sundays I clean the house. Hopefully once this new routine settles into itself I'll be less sluggardly and once again able to visit everyone's blogs regularly. At the moment I'm bouncing around like a ball with a nail in it.

Here are some picture from my first day as a paintball marshal: 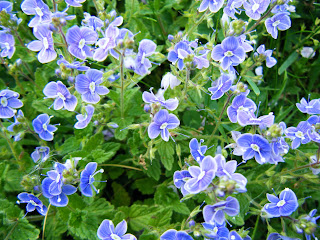 wowers (as my niece used to call
them, which feels appropriate) 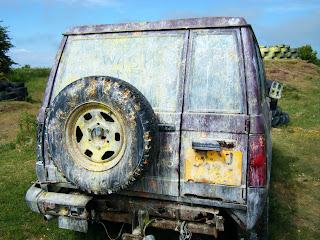 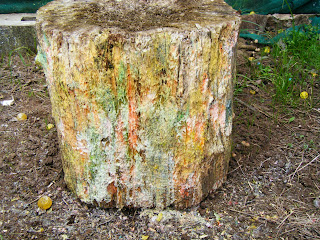 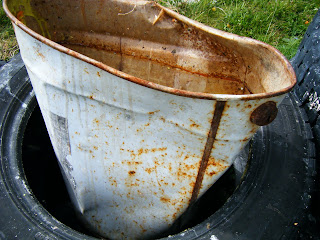 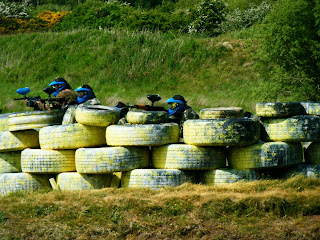 Now, of course, it's way past my bedtime: I must become faster at writing posts or this will never work.

* I had nothing whatsoever to do with the construction of the paintball website, so please not to mention the apostrophe, et al, issues.
Posted by Eryl at 23:36 22 comments:

98 Years to Change the World

I wanted to do a post on Louise Bourgeois, as she died on Monday and I admire her tremendously. But I found myself merely perpetuating the myth and you can get all that in the newspapers and all over the internet. You tube has some videos of her talking about her work but they're all really short so you have to piece all the snippets together.

The thing I really admired about her was that she just kept doing what she did, she made no concessions to trends, she had something to say and was content to keep saying it until someone listened. She didn't shout, she didn't alter her voice, she didn't try and fit in with the big boys. Her work was all about the emotions, even when reason was considered the only mental state worth a damn, and thus she opened the door into the art world for those of us who believe, as David Hume once said: 'reason is, and should remain, a slave to the passions.'

This is one of my favourite pieces of hers, it's called (if I've got it right) The Arc of Hysteria 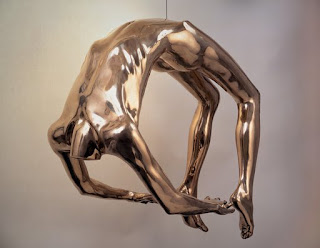 on one of the many video clips I've watched about her over the last couple of days I heard someone ask: 'why does she always hang men by the genital area?' I wonder if the answer is: 'so someone would ask that question.' The human form has been carved out of marble and cast in bronze since it's been possible to do so. Bourgeois is one of the few artists I've come across who doesn't just put her sculptures on a plinth. I like that. I also like that the bronze is polished. These differences of presentation add new meaning to old content.

Apparently she held a 'salon' every Sunday to which anyone was welcome, all you had to do was phone and let her know you'd be attending, that would have been worth moving to New York for.
Posted by Eryl at 21:43 16 comments: