I'm interrupting my self imposed blogging break* to ask you a question.

After a year of being redundant Stevie has gone into the paintball business, with a friend. Understandably he was a little trepidatious but having made the decision to go ahead he has thrown himself into it with enthusiasm. Now he has things to do and places to go and is, as they say, out from under. There are breaks between the Geiger counter's beeps.

Amongst all the old sheds, planks, machinery, and sawdust were these: 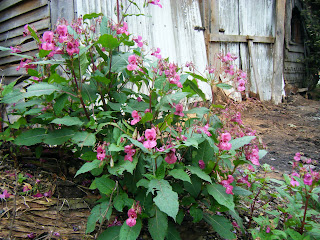 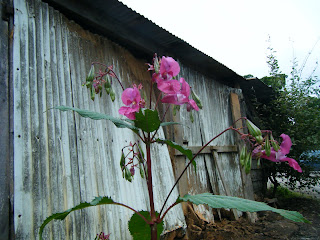 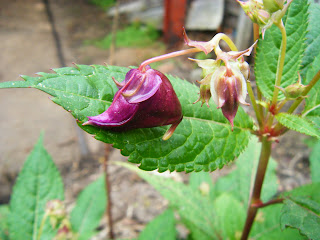 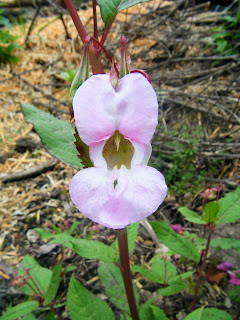 A lone pale one.

I don't know what they are but feel I should. So can anyone tell me?


*While I'm here: thank you for all your encouraging comments, understanding, and general firm friendliness.
Posted by Eryl at 15:00 37 comments:

Closed for the Season

I have a big, important (to me) project to get done, and I really want to do a good job, but I am easily distracted. In fact I positively seek distraction, and the more important I feel something is the more I seem to go looking for reasons not to do it. Apparently I'm not alone, lots of people behave in exactly the same way, and there are all number of theories as to why: fear of failure is one and another is something to do with self sabotage, I can't remember the details. Anyway, I need to minimize the number of distractions that lay claim to my time and get down to some serious work or I'll fail, and that will make me miserable.

I'm sure you've guessed, blogging is the biggest consumer of my time. I love nothing more than a bit of idle chat and this being able to just drop in on anyone, at anytime, without moving from my seat, is far too tempting; so I'm going to put the hems on it for a while. I will still drop in on everyone from time to time, I may read but not comment, and I may post the odd thing but probably not. Oh, I don't know! I just know that if I don't give this thing my best shot then I'll have only myself to blame for buggering it up, and that would be stupid.

So, that's it then, I'll see you when I see you, but here's a cup-cake to show how much I care: 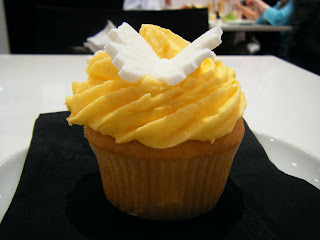 Email ThisBlogThis!Share to TwitterShare to FacebookShare to Pinterest
Labels: Breaking up is hard to do

I am fuming at the moment, the term 'incandescent with rage' doesn't even begin to cover it. So, in order for me not to embarrass myself by delivering an unthought-through tirade on the inherent evils of an aging capitalist system, I present a rather mild dilemma.

I like to have beautiful things around me but not inert or useless beauty, I like my stuff to perform too. Thus I have a teapot that is not only quite lovely it keeps tea hot and pours without dripping too; solid wood kitchen counters that act as a huge chopping board and are easy to clean as well as looking just the way I like, and a computer that not only does everything I could possibly require of it but is an object of such stylish good looks I have been know to take photographs of it. I could go on, but let's just say that whatever I bring into the house has to be both attractive, to me, and functional. Even the art I collect provides inspiration as well as looking just so.

But now I find myself with a conflict of form over function interests. I use a lot of pencils, and so keep a pot of them ready sharpened on my desk. Because they are on view I'm, let's say, particular about their appearance and so am always looking for pretty pencils. Finding them is not easy, but recently I found myself in a shop that sold 'vintage' pencils, some of which were these: 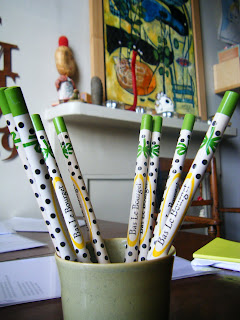 Gorgeous, huh? I bought all they had which was only 8. They are several of my favourite things: old, French and painted with green, as well as being pencils. I don't know exactly how old they are but they have that certain quality that seems to develop over time, and they have never been used. 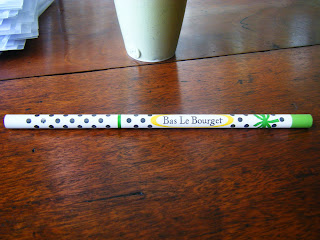 My dilemma is this: they have survived in this condition for some time, if I sharpen and use them they will fairly quickly cease to exist and I won't have them anymore, and for all I know they might be the last of their kind in the whole world. So, should I keep them as mere objects of loveliness or use them as they were intended to be used?
Posted by Eryl at 14:56 25 comments:

Five minute poems keep popping up all over the blogopolis and, because I can't help myself I've done one too, now. I think I might have cheated though, as although I timed myself to the minute I couldn't help adding a comma after my time was up, so it was maybe five minutes and twenty seconds. It's untitled because thinking up a title would really have pushed the limits. But here is a photo of the inspiration which can be a kind of title: 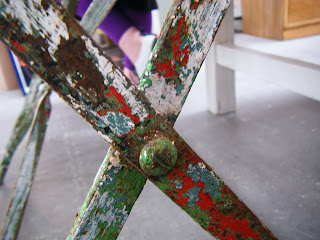 This table has been painted every shade of flag,
now, left to the elements its layers crack
and flake off in little curls like chocolate sundae decoration.

United nations’ disintegration, rusty
patches, like bald earth, spread,
and lichens push out like forests
reclaiming for the natural world
one wonky garden trestle.
Posted by Eryl at 18:01 19 comments: