I forgot to get a pumpkin. So I'm hoping this 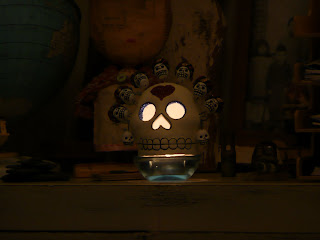 will keep those witches away.

Now I'm going to settle down with Cormac McCarthy's The Road. It made my tutor cry, so I'm rather looking forward to it.
Posted by Eryl Shields at 23:20 9 comments:

Late yesterday afternoon I found myself being driven, by my husband, in heavy rain through the wilds of Dumfries and Galloway: the car skidding off puddles, spray from lorries obscuring the road, dark coming on. We got stuck behind a particularly cautious driver for some miles, overtaking not being an option in such conditions. Sensing Stevie's frustration, worrying slightly about the work I should probably be doing, and not knowing quite what I was letting myself in for, I wondered if we should turn back. But something made me keep these thoughts to myself, and so we found ourselves standing in the rain, hats pulled down, collars up, ringing the bell of an only faintly familiar front door.

And then the door opened, and there in the amber light of a hall bursting with coats and scarves was the smiling face of our host. As we were welcomed in, and our coats taken, delicious smells coming from the kitchen had me trying to peer round the door for a look while at the same time trying not to appear nosy. Thankfully we were ushered downstairs to the sitting room. As we descended we saw big squashy sofas and chairs, a wood burning stove glowing in the hearth, tea-lights in glass holders on just about every flat surface and, crucially, other guests.

Before we knew it we were helping ourselves to drinks and nibbles, and chatting happily away to people who had been total strangers five minutes earlier. The room filled up. I didn't once feel like I didn't belong. Children started to clamber among us. Then it was announced that dinner was ready and we all went upstairs to find a table groaning under the weight of umpteen tempting looking dishes: roasted vegetables, pumpkin soup, salads, chillie, roast spuds. Stevie piled his plate high while I, wanting to try everything, took a little of each. Sitting by the fire I ate the best rice salad I've ever had, and joined in a conversation about the merits of living in the region: beautiful countryside, friendly inhabitants, proximity to the coast. And the downsides: dearth of public transport, rubbish shopping, miles from 'civilisation.' Stevie went for another plateful and I, for a second, thought of asking him to bring me some more rice salad and another spud, but decided to save myself for cake. This was, after all, the home of a budding master baker. How glad was I of that, uncharacteristic, moment of self control fifteen minutes later?

A surprise was announced, happy birthday was sung, and there on the table was a display to make Laduree weep with envy: chocolate cake, Smartie cake, Rocky Road, several cheesecakes, a cream topped pie. It took me some time to compose myself enough to make a decision. I chose chocolate cake and, just to be on the safe side, a hunk of Rocky Road: mmm... There was crunch; there was meltiness; there was moist, dense but light, sponge, and there was intense, almost musky, chocolate depth. After which a visit to the rain soaked pavement for a fag seemed in order.

When I got back inside instruments were being tuned: a fiddle, a guitar, a salt-tree? a bouzouki, and more. I'd never seen a salt-tree before, never heard the name: 'What's it called?' I asked, hoping for clarification.
'A salt-tree' the owner of the strange triangle of wood with strings said, 'with a P.'
Right then. I didn't like to ask where the P went, everyone else seemed to understand. She explained its Medieval origins and its Elizabethan relaunch, then touched the strings with the bow and out came an eerily compelling sound. The sort of sound that leads you to fairy grottoes. I'd heard a bouzouki but not been in the same room as one, and had never associated them with Irish music. But there in the heart of south west Scotland I was transported to mythical rural Ireland, then Elizabethan England, Greece, Morocco, not to mention Glasgow and modern Dublin. All by music played right in front of my eyes, as our hosts' little girl snuggled up beside me on the couch, sucked her thumb, and stroked my hair. Conversation buzzed between songs, about the music itself, the instruments, the passion of those who play while holding down jobs and raising families. It was great to see a group of people communicating through music, and doing something they clearly love doing just for the sake of doing it.

As the children began to fade parents readied themselves to leave. Instruments got packed into cases, coats and hats were donned, and people began to trickle out. We left just after ten with a bagful of cakes and scones. On the way home the rain continued to bombard the road, but we were so busy talking about what a great time we'd had we hardly noticed when the car jerked as it hit a body of water.

That was the birthday party of Kim, bearded rambler, bouzouki player, storyteller, philosopher, father, husband, and genial host. And he thinks he hasn't found the answer to life.
Posted by Eryl Shields at 12:35 16 comments:

Saturday's a good day. When I was younger Saturday was a day of recovering from Friday and preparing for the night ahead. These days Saturday is my mini-break day; the day I try not to work, but relax instead. I don't always manage it, and today I have a long, narrative poem to finish for Monday, so I know I will work tonight. But for now I am managing to attain that Saturday feel, and this morning I realised I have a new Saturday habit. A kind of add-on habit that enhances the Saturday feel.

For some time my way of relaxing rather than working has been to read every word of the Guardian Review. I love the Guardian Review, and it takes me pretty much the whole day - sometimes part of Sunday too - to read it. Even though it is all about reading, writing and the arts it doesn't feel like it has anything to do with my work while I am reading it - later my work benefits though. It feels like a hobby. No, it feels like escapism. It feels like a portal into the world of real writers. When I read the Guardian Review I feel like I belong in that world. And this feeling is greatly enhanced by the new add-on: a latte from the cafe in the high street.

I love a latte. I love the size, the heat, the creaminess that balances the intensity of the strong double espresso at its base. There's something urbane about a latte which, combined with Saturday, and the Guardian Review, makes being a provincial housewife less, well, provincial feeling. The fact that I can get them here in beyond-provincial-town is of no consequence, because when I am reading, Styrofoam cup in hand, I could be anywhere. And today, because Stevie is away sorting out his mother's house I had to go out and get them myself. I nearly didn't bother, I'm that lazy. But I'm so glad I did because the sun was shining, and when I returned to my room with my booty it looked like this: 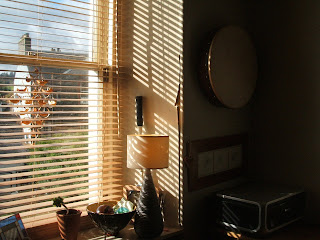 which for some reason made me feel like I was in Paris.

So, later, after my frugal supper of lentil soup, when I am slaving over line breaks and punctuation, I will, in my mind, be a real writer.
Posted by Eryl Shields at 16:59 23 comments:

The Drama in My Head

Today I have been head down trying to imagine my play in terms of sound only. Trying to translate all the visual images I have about my character's life and actions into noises, if I can put it that way. So, I'm thinking music, pots bubbling, the phone ringing, a child interrupting, and about the distance from the mic these sounds need to be, to show my character's feeling of powerlessness over her life as it is at this moment. I was sitting in silence and imagining sounds, closing my eyes to sights. Then I needed a pee...

Can you imagine the sound this 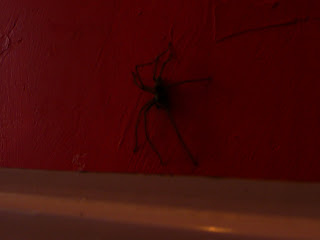 engendered when I brushed up against it on the way to the loo?
Posted by Eryl Shields at 17:01 24 comments:

Do you ever feel you've bitten off more than you can chew? At the moment I have to:

1) Prepare the answers for questions I will be asked later today for a promotional DVD for the campus.

2) Ready myself to engage with a visiting writer, also today.

3) Write the blurb, plot outline, and first chapter of a novel.

6) Check out Ghazals and try writing some

8) Write a prose poem a day

10) Organise a series of classes to combine philosophy and creative writing in two primary schools in order to teach them next semester.

11) Prepare my next lesson for Wednesday.

13) Cook supper and deal with the debris of eating and general living, for three adults, every day.

All this and I also have my Nietzsche book to finish. Will I manage to hold on to my sanity this year?
Posted by Eryl Shields at 10:21 15 comments:

Email ThisBlogThis!Share to TwitterShare to FacebookShare to Pinterest
Labels: will I ever sleep again?
Newer Posts Older Posts Home
Subscribe to: Posts (Atom)