Tomorrow I have my first class as a university seminar teacher. I am being trusted to get twelve first year undergraduates through the first of the four core courses they need to pass in order to get their degrees. I will have to teach them how to write academic essays, how texts can manipulate them, how to decipher the coded messages we all receive every day. From me they will have to learn how to learn at university level: how to make the most of lectures, summarise the books they read, and form coherent arguments of their own. Not all of them will be doing this in their first language because some of them are overseas students. How I feel sorry for them all. But I need the job.

Meanwhile, I am still a student myself and just getting to grips with being back in the throws of work after a decidedly non-working summer. And I seem to have forgotten how to write. I still haven't mastered poetry and my prose, which once was good, is an abomination. I can feel my grades slipping.

The half bottle of wine I've just drunk probably isn't helping; is it just me or is it awfully warm in here?
Posted by Eryl Shields at 21:30 17 comments:

Kicking Against the Pricks

It's back to school for me today. The first day of the autumn term, and I am so looking forward to it. I haven't quite done the full prep, not given my colleague's stories, emailed to me a couple of weeks ago, the attention they deserve, so I'm going to have to wing it a little. It's a Monday morning, I woke up before my alarm went off, and Stevie wasn't (and still isn't here) here (he's gone to Glasgow for an interview). It feels so normal.

I still don't know how I'm going to pay my fees, but I'll keep attending until they escort me out the building. Then I'll put it in my book, which, having been abandoned over the summer, is beginning to come back to me.

And if I wanted a reason to stop feeling sorry for myself and bloody get on with it I found one here. Now I really know I have nothing to complain about. Jane is a friend of mine so I knew something of what she'd been through, and what she is going through now. But fucking hell, read this. If I end up living in a council house on benefits all I'll need to do is think of Jane to know how easy I've got it.
Posted by Eryl Shields at 10:23 14 comments:

An Angel At My Table 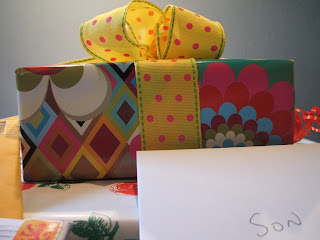 Twenty three years ago, on this very day (7th September), I woke up at about eight o'clock in a warm wet bed. It took me a moment or two to get over my disgust and realise what was happening, after all it wasn't supposed to happen for another fortnight. I got up, stripped the bed and phoned Stevie's office, he hadn't yet arrived, so I spoke to his boss. I then had a bath and phoned the hospital. It was beginning to hurt. But it was worth it (and the agony that was yet to come) because at five to three that afternoon Bob gasped his way into the open air all fingers and toes accounted for.

After living together for five years, Stevie and I had married on the 18th of August the previous year with the express intention of having a child. Being a bit of a 'by the book' sort, I had come off the pill six month earlier. I hoped to get pregnant on my wedding night. That wasn't to be, it took five months. Five months! It seemed like an age. By the time that little card stick turned blue I was convinced I was infertile. But no, so we went out and celebrated with champagne. Only one glass for me and no more for another nineteen months, until I'd stopped breast-feeding. That was worth it too, because although motherhood hasn't always been easy - to immunise or not? shouldn't he be home from school by now? Oh my god, what have you done to your hair? - it is by far and away the best thing I have ever done. So today we celebrate.

Like my mother, I express my love with actions rather than words. And, also like her, I believe the best way to show someone you love them, that you are thrilled by the fact that they exist, is to give them what they need to continue to exist: food. When it comes to my family food is my poetry. I have spent a great deal of my life labouring to perfect my skills as a cook. At first I struggled badly, although I followed recipes to a t they rarely came out looking like the picture in the book. Things usually tasted ok but I worried about whether they tasted as they were supposed to and suspected they didn't. If I hadn't had people to feed I would probably have given up, but I did, so I didn't. I cooked, from scratch, every day, and slowly got better at it. I began to understand how ingredients reacted, to each other, and temperature. I listened acutely to the reactions of Stevie and Bob, and those I considered more expert than me, to try to discern what worked for them, and at some point began to experiment, usually substituting what I had for what I couldn't be bothered to go out and buy. When I bought Nigella Lawson's first book, How To Eat, in the late nineties I realised for the first time that I no longer needed pictures to show me what a dish was supposed to look like. It had only taken me about twenty years to get to that stage. Now I only use other peoples recipes as templates, and I don't think I've made anything inedible or unappetising this millennium. 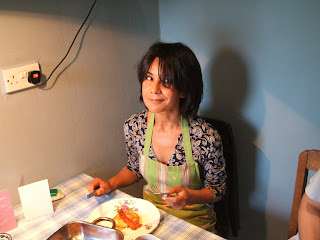 The cook gets a breakfast break.

We have developed a birthday meal tradition over the last twenty odd years: big breakfast with something fizzy to wash it down, no lunch, a favourite of the celebratee for supper with cake for pudding. Today I did pancakes with bacon and maple syrup for breakfast, Bob didn't want wine so we had that with supper instead. Which was Patatas Bravas (my version includes Chorizo sausage, as I once ate it in the south of France) with salad, followed by Bob's favourite NYLON cheesecake. As it's now way past my bed time I'm too tired to give recipes. 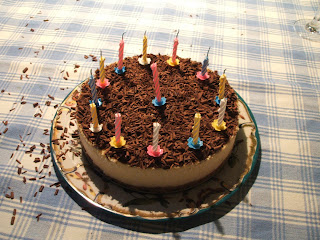 I (we, really) got back on Sunday night. The funeral on Friday had gone well: odd things funerals, they're sad, beautiful, and cheery - due to seeing and chatting to people you haven't seen for a while - all at once. You can be laughing one minute and teary the next. But one thing they do is allow you to let go and move on. So on Monday I was hoping to get back to happier things. I began to clean the house and work out a menu for the week, and generally to get things back in order so that I could begin to work again and ready myself for the new term. Then I got a phone call from Stevie to say he was on his way home as he and the company he worked for had 'parted company'.

He worked in recruitment in the banking and finance sector. It seems the economy as it heads for the bottom of the abyss has decided to take us with it. I feel like I'm in an Anglo Saxon poem, death and destruction is all around me. I am the lamenting wife.

So the last few days have seen me trying to make sense of this new phase. How to ensure we can put food on the table in the long run, if no new job comes along? How to keep those many bills up to date? My course fees are due on Monday, am I being selfish in wanting to continue my degree? As a part-time, post-grad student there doesn't seem to be any help out there. There's plenty of help for undergraduates, they are seen as potential workers, but for a middle-aged, would be writer there is nothing, I'm on my own. I know I can't complain, a Master of Letters in creative writing is a luxury. But I was hoping it would lead me into teaching as well as writing. I have no plans to lock myself permanently away in a boat-house on a loch and write my great work. I hoped the degree would enable me to become a functioning member of society too.

Not that I think those who do lock themselves away and write - or paint, solve equations, or examine the sex life of gnats - aren't contributing to society. They absolutely are. I just don't think I'm one of them, much as I fantasise. I'm too tangled up with other people to take myself off into hiding. If I lived in a croft up a mountain, who would eat my chocolate and rum Panna Cotta? 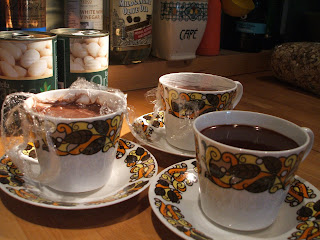 Soak the gelatin in cold water until it swells. Meanwhile bring the cream, milk, vanilla and sugar to the boil in a saucepan. Add the chocolate, stirring until it melts and becomes one with the milk/cream/sugar mix. Turn off the heat. Squeeze the excess water out of the gelatin and add it to the pan of chocolate sauce. Stir till incorporated. Add the rum. Pour into moulds or, as I did, tea-cups. It will stretch to six dariole moulds should you wish. Leave to cool, then put in the fridge to set for a couple of hours. Unmould, or not. Eat and forget your troubles, if only for a while. I have to confess that, not having a recipe to hand, I made this with a whole carton of double cream and just a little milk and it came out more like jellied creme brulee. Having, now, looked at a Panna Cotta recipe I have revised the quantities here. It should come out more wobbly and less dense. I enjoyed the denseness myself, even though it was wobbliness I was looking for.

Tonight I'm going to try lavender Panna Cotta. My sister-in-law assures me that it's delicious and I have lavender sugar in my larder made with my own grown flowers. And this time I will use moulds and turn them out. I'll let you know how it goes. When times are tough I cook. Until the food runs out that is.
Posted by Eryl Shields at 13:08 11 comments: