As it's Tuesday, and I try to make a post on a Tuesday, and I didn't manage it last week, and I still haven't written up the next instalment of the Camper-van tales, I thought I'd better just say hello.

It was Spring-Fling this weekend, that is the event in this area that sees over 70 artist's studios open to the public. This is a large, remote region so you can travel for miles and still not get round a fraction of the studios. I usually pick out a few that look interesting in the brochure and take in any others that are near at the same time. This year, however, I didn't have to do that because two friends were exhibiting and so we built our itinerary around them. On Saturday we went to see Maggie Ayres (Kim's wife) and Rogan Ayres of cake baking fame. Maggie's work was gorgeous, I only wish I'd had some cash (not to mention space) to buy something. Luckily Rogan's wares were a bit more affordable so we bought scones (with rather sinful chocolate chunks in them) and biscuits, all of which were so delicious we didn't need to find even a temporary space for them. We'd have bought more but he'd sold out of cake by the time we got there, which wasn't particularly late.

On Sunday we went to see Liz who is a sculptor, and a very fine one indeed. Again, I couldn't afford a bronze but I did take this photo of her garden wall. Wouldn't you just die for a wall like this? 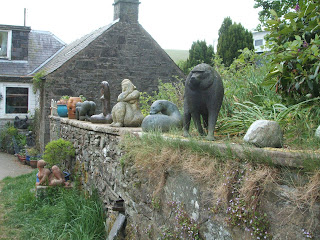 The Camper Van Years: It's Ours 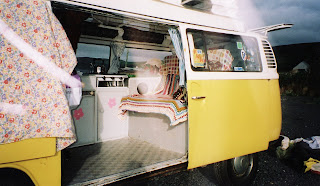 In order to be successful when viewing a VW camper van you need two things: to be first, and to have the cash on you. They invariably get snapped up by the first viewer, unless he (or she) doesn’t have the cash. Although Stevie had put off coming home to go see the van he wasn’t the first in line. Someone else had arranged to see the van at noon and the seller, being an honourable sort, wouldn’t hear of Stevie going over earlier. He was to sit at his parents house and wait for a call.

On the Friday night I could barely sleep. When I did doze off I would dream of empty roads and beach bonfires. That morning I paced the floor like an expectant father, and kept trying to tell myself we wouldn’t get it, the first chap would buy it. I was due to meet my best friend for lunch in Glasgow and from the minute we got together we talked of nothing else. And constantly checked the time. At last the call came: the first bloke didn’t have the cash!!!! Stevie was on his way. Rhona and I could hardly contain ourselves, we hit the second hand (vintage, antique, charity) shops in the west end, and hunted. I bought: two eiderdowns, one a beautiful pale grey-mauve paisley print, the other a riotous yellow seventies floral; a picnic hamper with china plates and cups and bone handled cutlery; a small bar of lavender soap; several old multi-coloured blankets and a sea green enamelled tea-pot. Exhausted we stopped for coffee and cake and as we sat down to gorge my phone rang: it was ours. Now we just needed to get it home.

We devised a very simple plan: Stevie would get in his car, drive up to Scotland, pick me up and drive back to Bedford. The next day he would go off to a sporting event he was taking part in in Wrexham and I would get a taxi to the village of the van and then drive it home. Bob agreed to come along to keep me company. These vans only do about fifty miles and hour so it would be a long drive back to Scotland.

The three of us arrived back in Bedford at about midnight. Stevie’s parents were leaving for Scotland first thing so were sound asleep by then. Bob and me didn’t actually see them as they had gone by the time we dragged ourselves out of bed. Stevie had gone too. We had breakfast and ordered a taxi.

We told the taxi driver all about our mission and he became the first of many middle aged men we would meet who once owned a VW camper, or knew someone who did, and got a glint in their eye at the mention of one. Although we had the exact address of the house we didn’t need it, it was an Elizabethan thatch roof cottage with the van parked right outside, we spotted it immediately.

Gleamingly yellow it stood in dappled sunshine in front of the old stone house as if a giant had dropped his can of lighter fluid. The taxi driver came out for a closer look. We all grinned as we walked round it and read the stickers on the window – ‘FUN’, ‘The BAY’, ‘France’ - and took note of the brown floral back seats. Bob was particularly taken with the blue and white striped curtains, I swooned over the grill: we’d be able to make toast. The taxi driver wished us luck and went on his way. We rang the doorbell.

Christian, the young chap who was selling it, took us out for a ride to show us how to work it: he drove it for a couple of miles and I drove it back. Oh lord! It needed a certain ‘touch’, it wasn’t like driving a car at all, but I seemed to manage and was sure that by the time I’d driven it back to the in-law’s house I’d have it fully mastered.

After chats and a cup of tea Bobsey and I set off, it was only eight miles to Bedford. We thought we’d get there in fifteen minutes, stop off to have a spot of lunch, then pack up our stuff and be on the way home in no time at all. But that eight miles proved to be more problematic than we could have anticipated.
Posted by Eryl Shields at 22:26 21 comments:

The sun has been shining for three days. Three whole days, that's unheard of in these parts. So I have spent three whole days doing nothing but garden fire-fighting: weeding, and digging up all the dead plants. Now I have an awful lot of space to fill and I'm going to try to fill it with things that won't die this time. I'd really like to have a garden in which things just come up year after year, but I have a garden that kills plants. The only things that survive do so because they are in pots. I don't know what I do wrong when it comes to planting things in the ground but the only thing that thrives in my soil is ground elder. I can't even grow dandelions, and I would love to be able to as the tortoise loves them. I look over the fence at my neighbour's garden and go puce with envy at all her canary coloured mop-head danders.

So now I'm free, the work is in and I'll have to wait to find out if it was any good. At the moment I don't really care, I'm just so glad to be done with it, and the sun is shining. Tomorrow, instead of slaving away at my computer trying to excavate my mind for the perfect line to convey some abstract notion, I will treat myself to a bag of topsoil and a few seeds. And if it rains I'll bake a cake instead. That's freedom.

Next week I'll have to get back to writing so here's hoping it rains.
Posted by Eryl Shields at 00:35 12 comments: