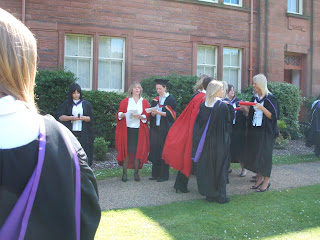 Some of this years graduates. Now there will be many more!

This is just a quickie to say that we have managed to save our university campus!!!!!!!!

In February this year it was announced that due to funding issues the University of Glasgow was going to pull out of our small, rural campus. The Scottish Funding Council didn't think we were worth financing. We thought differently and created a rucus. The local papers rallied round to support us and we have managed to maintain a small but vocal profile. We petitioned, we sought meetings and finally we walked the hundred or so miles to Glasgow to show our determination to keep the campus going.

Today it was announced that we have been successful. The SFC have relented and offered over a million pounds to keep Glasgow in Dumfries. Undergraduate recruitment will resume, the arts will continue to be taught here in this much neglected region of Scotland. The SNP (Scottish National Party) have pledged to not only keep university education in the region but to expand it.

At times we all felt like we were banging our heads against concrete. That no one was listening. That perhaps we should just accept our fate. But something kept us going. And now vindication! All those sleepless nights, all those frantic phonecalls and endless meetings and that agonising trek upon tar and concrete in ever shrinking shoes; all those hideous newspaper photographs and bizzare interviews were worth it. The population of Dumfries and Galloway get to keep their university and thus their access to the world of poetry, philosophy, history, creative writing and storytelling. It all goes to show that it's true, education, once given can never be taken away.
Posted by Eryl Shields at 22:01 9 comments:

For the past hour at least I have been trying to change my profile photo, I think you techie types call it the atavar. My last photo came courtesy of flikr but this time I couldn't seem to upload the new one onto flikr at all. So I moved to photobucket but there were 'illegal' characters in the url whatever that means. I have now resorted to trying blogger help's suggestion of posting the photo here and then doing something I have already forgotten, but will look up again. 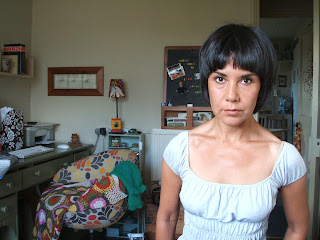 F***ing displacement activities: if I wasn't trying to avoid writing an essay on Walter Benjamin's concept of technology I'd be relaxing with a glass of wine and a novel.

Anyway, let's see if I can get this f***ing photo sorted. Ghad zooks

Update: NO! it didn't work, more illegal characters and I can't for the life of me see what crimes they might have committed, no wonder our prisons are full.

From Gramsci to Boden

I'm currently trying to teach myself Marxist Critical Theory for an exam on the 22nd. Arrgh! I missed half the course last semester so was unable to sit the exam at the right time. Now I'm down for the re-sit and have an essay to do too. It's the last thing I need to complete in order to get my degree and it's hard. Trying to discern the subtle differences between hegemony and ideology; what is 'post' about certain post-Marxist theories; the difference between Marxist, post-Marxist and Marxian and how Marcuse's approach to technology differs from, and is similar to, Benjamin's. Imagine my glee then when, yesterday, the Boden autumn catalogue flipped through the letter box.

The Boden catalogue is full of healthy, cheery people wearing slightly off-trend clothes. Some people might call them classics. Some might call them preppy. I tend to think of them as allotment meets Sunday lunch with the in-laws. There are cheery coloured cardigans with big buttons, flippy skirts and useful jackets. Wide-legged trousers, stripy shirts and sensible boots. Oddly ageing print dresses, an awful lot of applique and things with velvet trim. But the best thing about the Boden catalogue is the questions they ask the models. Here is a selection of questions and answers:

Best place to be in autumn? Somewhere where it's summer; London; Stamford Bridge.

I'm always told off for: talking too much; biting my nails.

Never have a quiet night in without: Popcorn; a Martini; a good stiff drink.

Who would you be for a day? A monkey; Demi Moore; Daisy Duke; a rockstar; Bob Marley; Pablo Neruda.

I shouldn't like to but I do: gossip; rubbish t.v.; cheeseburgers; licking stamps.

My two favourite answers are 'a monkey' and 'licking stamps'. The first because of the stretch from who to what, it makes me wonder if there is a particular monkey that she would like to be, which could just about come under 'who', or is it any old monkey? This would really be a what. Here is a girl who thinks nothing of breaking the rules. I'm so glad there are still some people like that around.

The second throws up more questions than it answers: Why does she feel that licking stamps is something she shouldn't like to do? Is there some tacit proscription against such a seemingly innocent pleasure? Is the glue on stamps considered, somehow, dangerous? Or ghastly? Or is it the stamps themselves? Perhaps it has something to do with tongueing the Queen.

I can't think of anyone, or anything, I'd like to be for a day. Except, perhaps, for me on my death-bed. According to Martin Heidegger (early 20th century German existentialist philosopher) one can't become truly authentic until one knows one is going to die. That is until one becomes fully aware of one's own mortality. Which is more than just knowing in theory that we all die eventually. I'd quite like to reach that state of authenticity sooner rather than later, so being my dying self for a day now might help.

I won't bore you, dear readers, by giving my answers to all the questions but I would be jolly interested if you answered one or two of them. And I will tell you this: the thing I'm always being told off for is overcomplicating things. I don't know why this is though.

Well it's back to Marxist critical theory for me now, briefly, and then I'm off to get all my hair cut off.
Posted by Eryl Shields at 12:17 11 comments: