What an interesting couple of days I've had! We, of the Save Crichton Campus campaign group, have been trying to think of ways to keep the campaign going during the summer holidays. So Bob suggested setting up a group on Facebook, 'do it' I said, and he did. On Monday he patiently set up a group, using my profile, on facebook called Save Glasgow University at Crichton Campus and I set about inviting people to join. I got six members in a few hours and then one of them noticed we'd spelt Crichton wrong! So, as I couldn't edit the title, we had to scrap that group and set up a new one yesterday. Then Bob noticed that Gordon Brown, our new Prime Minister, had joined the facebook community so he invited him to be his friend. Gordon accepted. Bob then invited Mr. Brown to join our group. This morning when I got up Bob rather excitedly told me to check the group page, before I'd even had a cup of tea. I put the kettle on then went to my computer.

There in the members section of the group was, da-da-da, Gordon Brown!!!!! How cool is that? Of only two groups our P. M. has joined one of them is ours. What a scoop. It seems that he is a truly egalitarian Prime Minister interested in keeping education available to everyone. Lets hope the money men take note.

I'm afraid with all this activity I still haven't got round to writing up my hike diary for this blog yet but hope to get it done at some point soon. I know some of you want to know about the baby frog plague. Meanwhile here is a photograph of the four key walkers in our finest at the Graduation Ball. 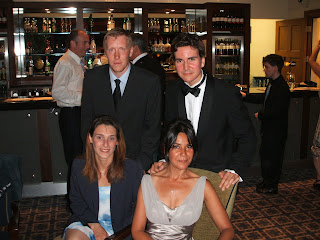 We are (clockwise from bottom left) Wendy, hike co-ordinator; Robert; Bob and me.

You won't believe the problems I had with that dress but at least it was long enough to hide my hugely puffed up ankles and feet.
Posted by Eryl Shields at 12:29 12 comments:

The walk is over and I'm now back where I belong: sitting at my desk, a plie of work chiding me at one end. I seem to have contracted elephantitis and fear I'll never be able to wear shoes again. Bob is on crutches and we are both exhausted.

I can't quite believe I did it. About ninety miles over five days with erratic weather. We had a variety of setbacks including a very late start due to the press; a sick child that caused another delay; various injuries and general complaints and at one stage we got totally lost. But we found so many interesting things: a plague of baby frogs; wildflowers galore; a shrine to a Celtic supporter in a forest and a fantastic truck stop in the middle of nowhere to name a few.

Once I've recovered sufficiently I'll write up the adventure but for now here is a snap to, hopefully, whet your appetites. 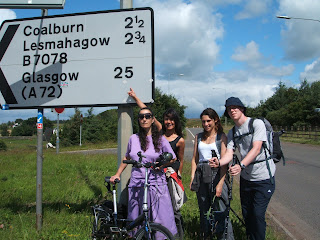 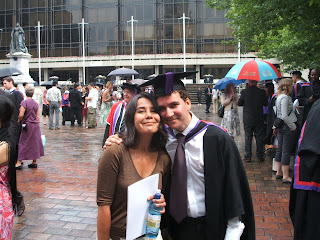 Bob (my son) and me are going for a walk tomorrow with a few friends. We will start in Dumfries and finish, five days later, in Glasgow. Why? For the Save Crichton Campus campaign. The hope is that we will engender some much needed publicity and some cash. I am also secretly hoping to loose a pound or two so I can do my ball gown justice on the 13th. That will be a bonus, though, and an unlikely one at that considering the amount of chocolate and biscuits we plan to take.

We have our waterproofs, sturdy boots and comfy socks. We have blister plasters, a first aid kit and maps. And we have enthusiasm and will. I also have forty six year old smoker's legs but am hoping that the positives outweigh the negatives.

I'm really looking forward to this walk: I've driven to Glasgow many times but all I really see are the other cars on the road. One sees so much more when on foot, there's more time and one passes by so much more slowly. I'm sure there are many secrets to discover en route: wildflowers, animals, even buildings to notice if only someone would look. Well this is my chance to really look and properly see. I'll take a note book and my camera with me and write a diary as I go. I will fancy myself intrepid or rather like Dickens who I believe walked all over the country.

The picture above is of Bob and me at his graduation. When I graduate later this year I would really like it to be from a university campus that is no longer under threat merely because of a little bit of money.